ENAIRE' stand at the World ATM Congress, held from 6 to 8 March in Madrid, was the location chosen to sign the document, which details the actions needed to implement the Single European Sky in Spain.

Each year, the joint undertaking of the SESAR project (Single European Sky ATM Research) updates the ATM Master Plan. Once approved, each State must define its own Local Plan (LSSIP), specifying the actions taken and planned for the national implementation of European objectives.

Thus, once the work was completed collectively on a national level to elaborate the Local Implementation Plan of the Single European Sky for 2017, it was signed by representatives of the five participating Spanish bodies: the deputy director of Air Navigation and Airport Systems of the Directorate General for Civil Aviation, Jesús Pérez Blanco; the director of the Aviation Safety and Security Agency (AESA), Isabel Maestre Moreno; the chief general of the Spanish Air Force, José María Juanas García; the director general of AENA, Javier Marín San Andrés, and the director general of ENAIRE, Ángel Luis Arias Serrano. 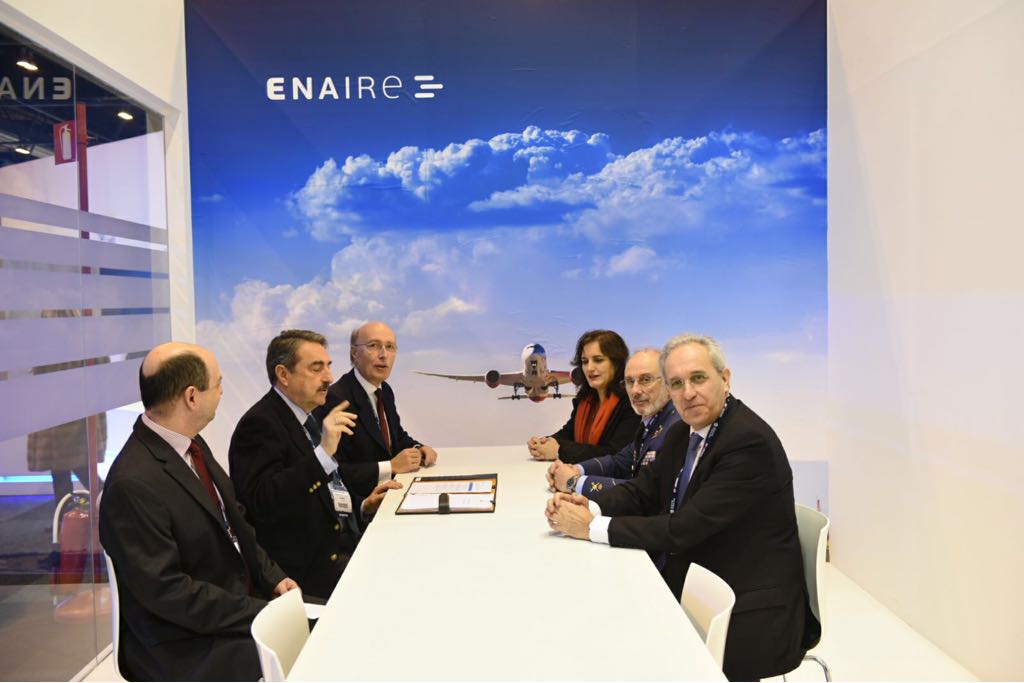 The Plan that has been signed is the tool for monitoring coherence and convergence between the various national plans to develop air navigation towards the Single European Sky initiative and the Global Air Navigation Plan of the International Civil Aviation Organisation (OACI).

The World ATM Congress is the annual meeting of the international aeronautical community. This forum, which is being held in Spain for the sixth year in a row in the Ifema venue, discusses the current situation of the sector and the main future developments to be made in air traffic management.

The event welcomes 7,500 professionals from 133 countries, and 225 countries from the aeronautical sector.

Over three days there will be presentations, along with an exhibition that is open to the public, where companies in the industry will exhibit the latest air traffic control technologies and their products.

In this Congress, the group of companies of the Ministry of Public Works is represented by ENAIRE, Ineco and Senasa, with a shared exhibition space showcasing their most relevant projects, agreements and results.

ENAIRE enters the second year of execution of its Strategic Plan: the 2020 Flight Plan, which sets the organisation's road map in its path towards excellence in safety, efficiency, competitiveness, technological modernisation, innovation, digital transformation, internationalisation and environmental sustainability.

The company is committed to developing our business in the international field. ENAIRE aims to be one of the most relevant European players, through its active participation in strategic alliances and international consortiums.

In this regard, ENAIRE is evolving its systems and services in line with the requirements of the Single European Sky and the research and development programme associated with modernising air traffic management in Spain, called SESAR 2020. ENAIRE is participating in 19 projects of SESAR 2020.

ENAIRE is the company of the Fomento Group that manages air navigation in Spain through its 5 control centres, 22 towers and its network of aeronautical infrastructure and equipment. ENAIRE manages more than 2.2 million square kilometres, four times the area of Spain, which is the fourth largest air space in Europe in terms of traffic volume. The air traffic managed by the public company transports more than 250 million people on 2 million flights per year.