ENAIRE has signed the document that specifies the measures required to implement the Single European Sky in Spain, including the actions that have been undertaken and/or scheduled so that European objectives may be met by our country. It has been signed at ENAIRE's stand during the World ATM Congress, which is being held from 12 to 14 March in Madrid. 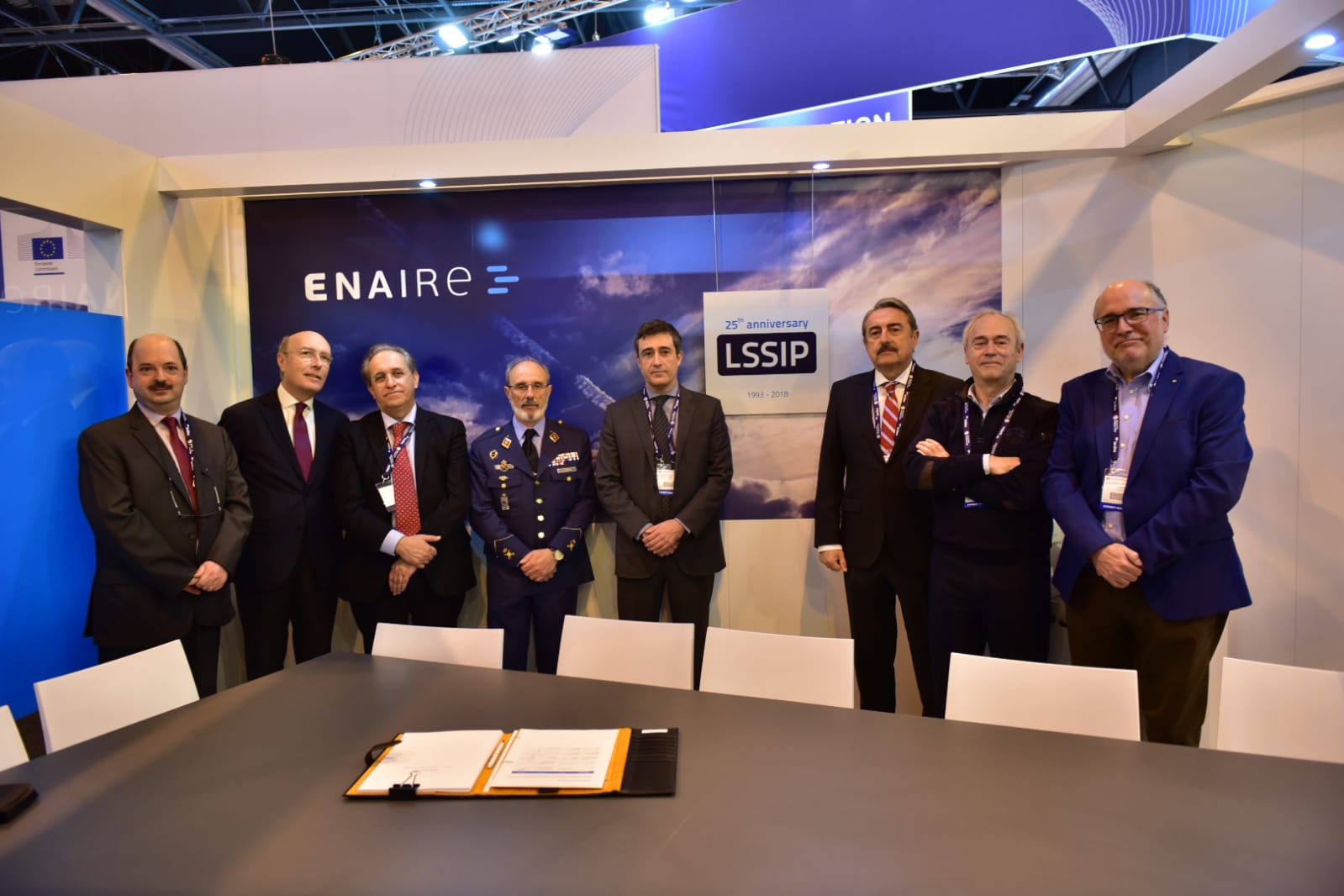 On this occasion, the document's signing commemorates the 25th anniversary of the first LSSIP, drawn up in 1993, where Spain was a key player. Two Spaniards, Juan Carrasco and Juan de Mata Morales, were in charge of designing the Plan at a local level. Spain was not only the leading country in designing the Plan, but also laid the foundations for the rest of the States to use the same structure for their respective plans.

Both Juan Carrasco and Juan de Mata Morales have been invited to the signing as guests and given due recognition by the signatories, among whom representatives from the five participating Spanish organisations were present: the deputy director of Air Navigation and Airport Systems of the Directorate General for Civil Aviation, Jesús Pérez Blanco; Enrique Fraile Riesco, Airport and Air Navigation Safety Director at Spain's Aviation Safety and Security Agency (AESA); the chief general of the Spanish Air Force, José María Juanas García; Aena's Regulated Business Manager, Javier Marín San Andrés, and ENAIRE's CEO, Ángel Luis Arias Serrano.

The Plan, the signing of which follows completion of work jointly carried out in 2018 on a national scale, is the tool that will be used to monitor the coherence and convergence of different national plans; its goal is for air navigation systems to develop into the Single European Sky initiative and the ICAO (International Civil Aviation Organisation) Global Air Navigation Plan (GANP).

In the last 25 years following the creation of the first Local Plan, a synchronised European Plan has been successfully implemented among the different States, as well as the introduction of a monitoring system to enable the aeronautical community to methodically identify any potential differences that may arise from the needs of the European Plan and possible scope for local implementation.

Each year the SESAR Joint Undertaking business alliance updates the ATM (Air Traffic Management) Master Plan, and, once approved, each State must define its own Local Plan (LSSIP), specifying any undertaken and/or scheduled actions needed to meet European objectives and put their own national Plan into practice.

ENAIRE achieved a 10% increase in 2018's Convergence Index, the indicator that measures the success of ENAIRE's deployment plans compared to the ATM Master Plan. This increase compared to the previous year follows the successful fulfilment of targeted annual objectives, thus consolidating the upward trend shown in recent years.

The World ATM Congress is the annual meeting of the international aeronautical community. This event will be held in Spain at IFEMA's Trade Fair Park in Madrid, from 12 to 14 March. This seventh edition will host 8,500 professionals from 130 countries, 230 companies from the aeronautical industry and 80 air navigation suppliers.

ENAIRE is the company belonging to the Public Works Department that handles air navigation in Spain. It renders aerodrome control services at 21 airports, including those with the most traffic.