Growth has slowed, but even so Spain continues to expand (3.7% in the first 8 months) faster than the European average (1.5%).

Spain continues to expand faster than the European averageENAIRE, which manages 16% of the air traffic in Europe, has already seen 71 months of uninterrupted growth.

All traffic types increased this summer (July and August), except for international traffic: overflights (those not taking off from or landing at a Spanish airport) grew the fastest at 6.1% and 92,565 flights; domestic flights rose by 4.4%, totalling 80,740, and international flights stood at 266,147, a 0.07% decrease. 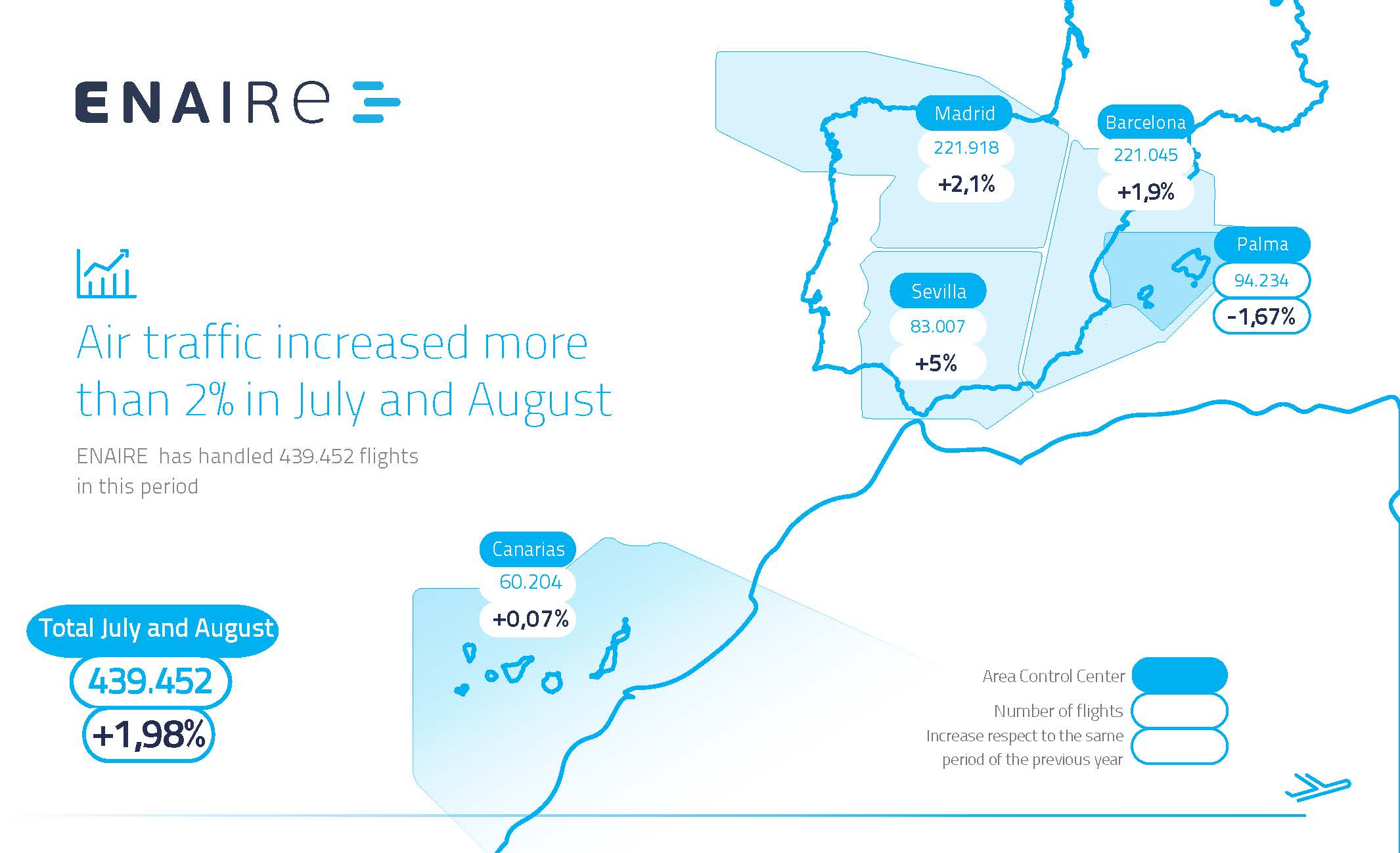 Cumulative data from January to August

Summer Plan: The fruits of our effort

As part of the Summer Plan, at the start of the year ENAIRE rolled out a series of technical and operational initiatives to manage the growth of air traffic while offering every assurance in terms of safety, capacity, efficiency, sustainability and quality of service.

These measures translated into a framework of continuous collaboration with Aena, the airlines and airline associations, other air navigation providers from other countries and the European network manager, EUROCONTROL.

This summer, ENAIRE's contribution was fundamental to the initiative of the Network Manager (EUROCONTROL) and its network action plan, intended to mitigate air traffic congestion in some European countries and containing specific incentives such as diverting almost a thousand flights a day from April to November so that traffic flows can avoid the saturated areas of Karlsruhe (Germany), Marseille (France) and Maastricht (Netherlands), which have capacity problems.

In this operational scenario, ENAIRE fulfilled its commitment to EUROCONTROL to improve how flights are managed in the airspace between Spain and France, where the traffic is heavy during the peak season. Specifically, ENAIRE has accepted some 160 additional flights a day by re-routing 48 new routes, thus helping to reduce the impact of delays in busy areas across the European network as a whole.

ENAIRE also promoted a series of measures across its five control centres, in addition to measures specific to each, in keeping with their specific characteristics and needs.

The "BCN A PUNT" initiative warrants special recognition. Promoted by the Ministry of Works to maximise both land-side and air-side capacity at the Josep Tarradellas Barcelona-El Prat Airport, this initiative is a joint project between ENAIRE (through the ATENEA Office), Aena, the Civil Aviation General Directorate, Aesa and EUROCONTROL.

The net result of all this has been a considerable reduction (54% from January to August) in delays attributable to air navigation at El Prat.

In 2018 ENAIRE handled 2.1 million flights to and from four continents (Europe, America, Asia and Africa), transporting 300 million passengers. ENAIRE has managed 1,457,366 flights so far this year, 4% more than in the same period in 2018.