The panel of judges for the ENAIRE Foundation Awards, which this year mark their 26th anniversary, has announced the winners in the following categories: Aviation Journalism Award, I+Dron Award, Luis Azcárraga Award (Innovation in Aviation) and José Ramón López Villares Award (Bachelor's and Master's theses).

This year, Airbus Spain co-sponsored the I+Dron Award in order to associate this accolade with the latest developments in the aviation industry.

A total of 79 projects were submitted for this edition. 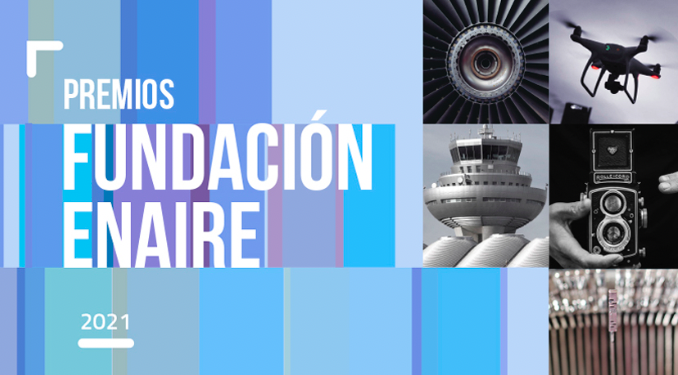 Every year, this award recognises works of journalism that are disseminated in the press, radio, television, and on digital and online publications that are related to air transport and navigation, as well as those involving airport facilities and airport services in general. The award is worth 12,000 euros, which this year will be distributed equally between two winners.

Of the 45 candidates nominated this year, the jury decided to present the prize for two very personal reports that reflect the exceptional situation that the world has experienced with the pandemic, and that pay tribute to the aviation sector, which was particularly hard hit in 2020, relating the experiences of flight personnel in those difficult months.

One recipient was Martín Mucha for his report Confinados en el Cielo (Locked Down in the Sky), published in the Crónica supplement for major reports (EL MUNDO) on 24 May 2020.
Javier Ortega Figueiral received the other award for his report Tripulantes frente a la Pandemia (Crewmembers against the Pandemic), published in La Vanguardia on 17 June 2020.

Presented annually, it recognises those technical works, studies, projects, papers or publications that make a unique contribution to innovation in the drone sector, in the fields of aircraft design and aircraft system technologies (including propulsion, communications, control, etc.), drone production, operation, and traffic management, as well as the development of new applications. The award is worth €12,000. In addition, this year the award is being co-sponsored by Airbus Spain, and the winner will be able to present the project to technical managers at the company. If the project interests them, they will consider prototyping it.

This year, there were 10 nominees, and the award was presented to Martín Molina and Pascual Campoy Cervera, of the CVAR (Computer Vision and Aerial Robotics) Research Group at the Polytechnic University of Madrid, for their project Aerostack:Entorno informático abierto para construcción de drones autónomos mediante componentes de robótica e IA (Open IT environment for building autonomous drones using robotics components and AI).

The jury recognised the great social impact of this tool, which is highly versatile and universally and freely accessible. It also contains a multitude of applications (maintenance, inspection, research, teaching, etc.) and underscores the multidisciplinary nature of drones, showcasing countless research areas and demonstrating their practical functionality, to include participation in competitions of different kinds.

Presented annually, it acknowledges work, studies or projects that offer a major contribution to air transport in terms of planning and organisation, economic and administrative management, environmental impact and protection, as well as technological research and innovation. The winner is awarded €12,000.

This year there were 12 nominees, and the award was presented to Cristian Eduardo Verdonk Gallego for his work on "Extraction of Trajectory Contextual Factors and its Application in the Trajectory Prediction using Statistical Methods", completed as part of his PhD thesis at the Advanced Technical School of Aeronautics and Space Engineering (ETSIAE) of the Polytechnic University of Madrid.

The jury recognised this study's contribution to enhancing the flight path prediction process through valuable information that takes into account not only aircraft dynamics, but also other relevant parameters such as air traffic in the immediate surroundings.

This is an annual prize to reward Bachelor's or Master's degree projects related to air navigation or airports in the following disciplines: Aeronautical and Aerospace Engineering, Civil Engineering, Structural Engineering (especially the branch of Roads, Canals and Ports), and Industrial and Telecommunications Engineering. These projects may be done at any

Spanish university and written in any of our official languages or in English. A maximum of four prizes may be awarded every year, each one worth 3,000 euros.

In the air navigation speciality, the award was given to:

*Alberto Gayoso Gallego, for his work Adaptation of en-route air traffic control sectors to accommodate free route traffic over Spain. Thesis for the Master of Science degree at the Advanced School of Industrial, Aerospace and Audiovisual Engineering of Terrasa (ESEIAAT) of the Polytechnic University of Catalonia (UPC).

The jury acknowledged the methodology proposed in this work to redesign control sectors in order to accommodate traffic flows in a "Free Route" environment, focusing on the airspace of the Spanish mainland. The solutions proposed are of great interest to the developments that will take place in the next few years involving this concept.

The award in the airports speciality was presented to:

For this work, which seeks to improve and automate the existing methodology for determining the preferred orientation of runways, the jury recognised its high technical quality and logical flow. It also employs an innovative approach to delve into a key problem in aerodrome design, namely, ensuring runways are oriented in such a way as to guarantee safe operations. This new way of establishing and verifying the optimal orientation and the wind absorption coefficients has a great application potential.

For this work, the jury noted how it analyses the feasibility of using an unmanned aircraft to conduct runway inspections at airports with parallel runways, when the parallel runway is in use. By delving into novel territory, it could serve as a reference for future work involving airport environments.