At the World ATM Congress 2021, ENAIRE showcased its essential role in developing both the drone sector in Spain and the future of Urban Air Mobility.

The fair includes the latest trends and developments related to the area of navigation. It will bring together professionals dedicated to air traffic management, as well as leading international manufacturers of aircraft and air navigation systems. These representatives come from more than 130 different countries and encompass the entire spectrum of the air navigation industry. Professionals from the sector will be able to expand their network of contacts and close deals on the spot.

After the 2020 edition was cancelled due to the pandemic, this eighth edition, held at IFEMA in Madrid from 26 to 28 October, included the Expodrónica drone fair with 50 exhibitors. Which is why the so-called U-Space airspace generated so much expectation, as was made evident by all the media coverage:

Actualidad Aeroespacial: ENAIRE expects its U-Space platform to see the light of day in 2023

ENAIRE took advantage of the visit by H.M. the King to present him its EYWA platform. ENAIRE has designed the EYWA system to rely on Big Data and machine learning, the goal being to transform data into information, and information into knowledge, thus optimising organisational processes. This project will enhance efficiency and productivity by improving the management of complex situations, facilitating decision-making to reduce the impact of incidents. In his opening remarks, H.M. Don Felipe highlighted the enormous global challenge posed by the arrival of drones in the world of aviation. "Spain is very active in this regard, both nationally and abroad, and is working closely with our European partners to define the framework of operations, both now and for the near future", he said. The King took this opportunity to highlight the need to make the Single European Sky a reality: "This European Commission initiative is firmly committed to reducing airspace fragmentation so that it can be used more efficiently, thanks to the latest technologies and to collaborative network management, which allow users to fly more environmentally friendly routes". 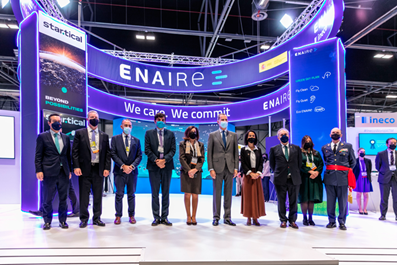 He also underscored the importance of "redoubling our efforts to successfully address all the challenges that might come up on our 'navigation chart', starting with safety - clearly our priority - followed by digitisation and new technologies, and, of course, higher environmental standards".

The secretary of Transport, Mobility and the Urban Agenda, who is also ENAIRE's president, Isabel Pardo de Vera, mirrored the King's sentiments. After noting the importance of having the top officials at CANTO and ATCA choose and reaffirm their confidence in Spain as the venue for the Congress, she stressed that "hosting this event is an honour, recognition and responsibility that we accept, with an unequivocal aspiration for continuity and permanence, given our keen awareness of the role of aviation in our country".

After finishing his opening remarks, Don Felipe spoke a few words in English, in which he highlighted that "our presence here today, after unfortunately cancelling last year's edition for obvious reasons, and being able to organise this Congress once more, is not only a pleasure and an honour, but also solid proof that we are witnessing a steady and longed-for recovery of the entire air sector, of which Spain is proud to be 'the standard-bearer'".

ENAIRE took advantage of the event to hold multiple meetings with counterparts from various countries and with industry, with which it signed agreements: 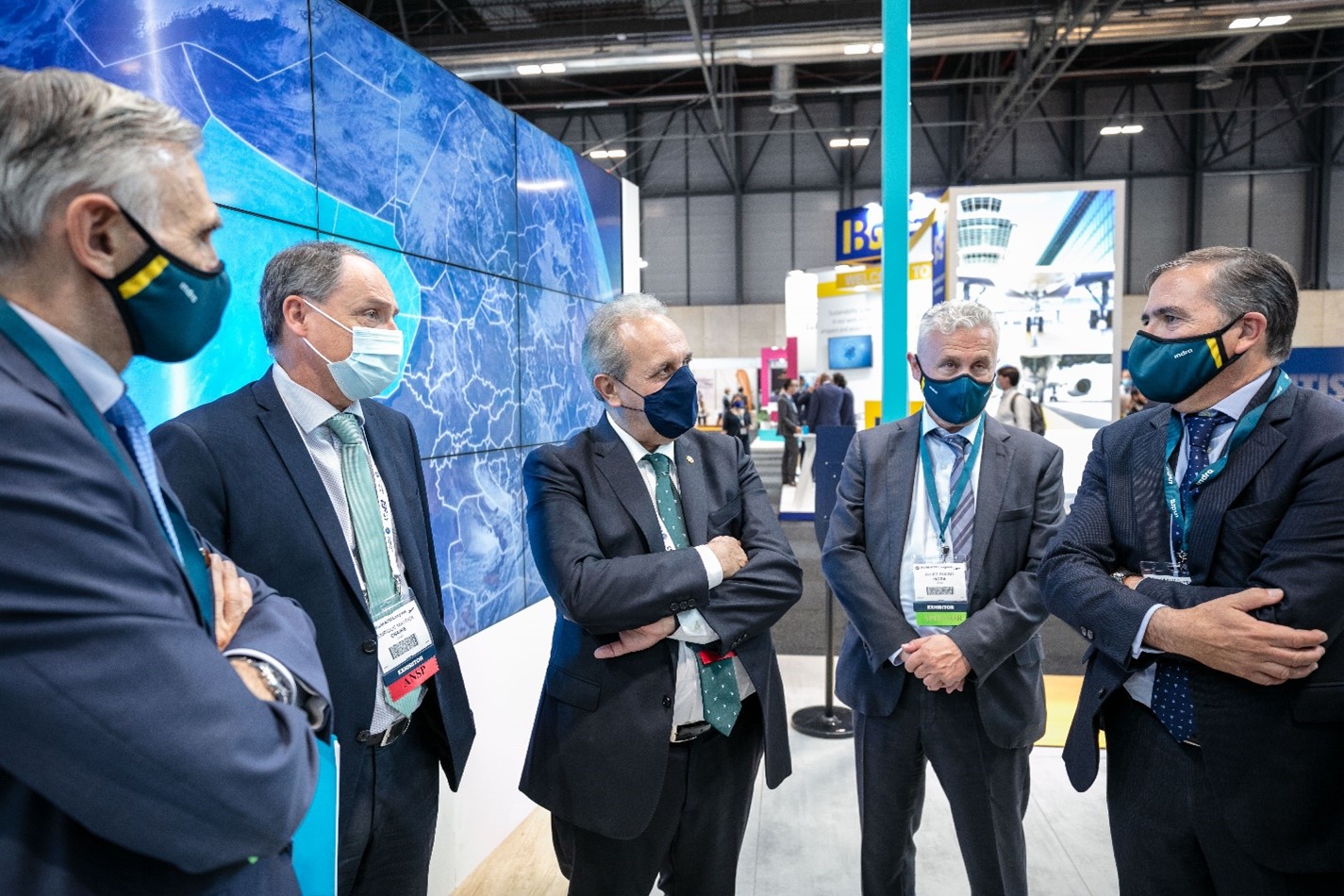 The CEO of ENAIRE visits the Indra stand.

The media showed special interest. Then, ENAIRE's CEO, Angel Luis Arias, during an interview with TVE. FlyNews Interview, Ángel Luis Arias, CEO of ENAIRE: "The European country that has lowered its air navigation charges the most is Spain"

Aviación Digital: ENAIRE promotes the advanced use of drones and Urban Air Mobility in Spain 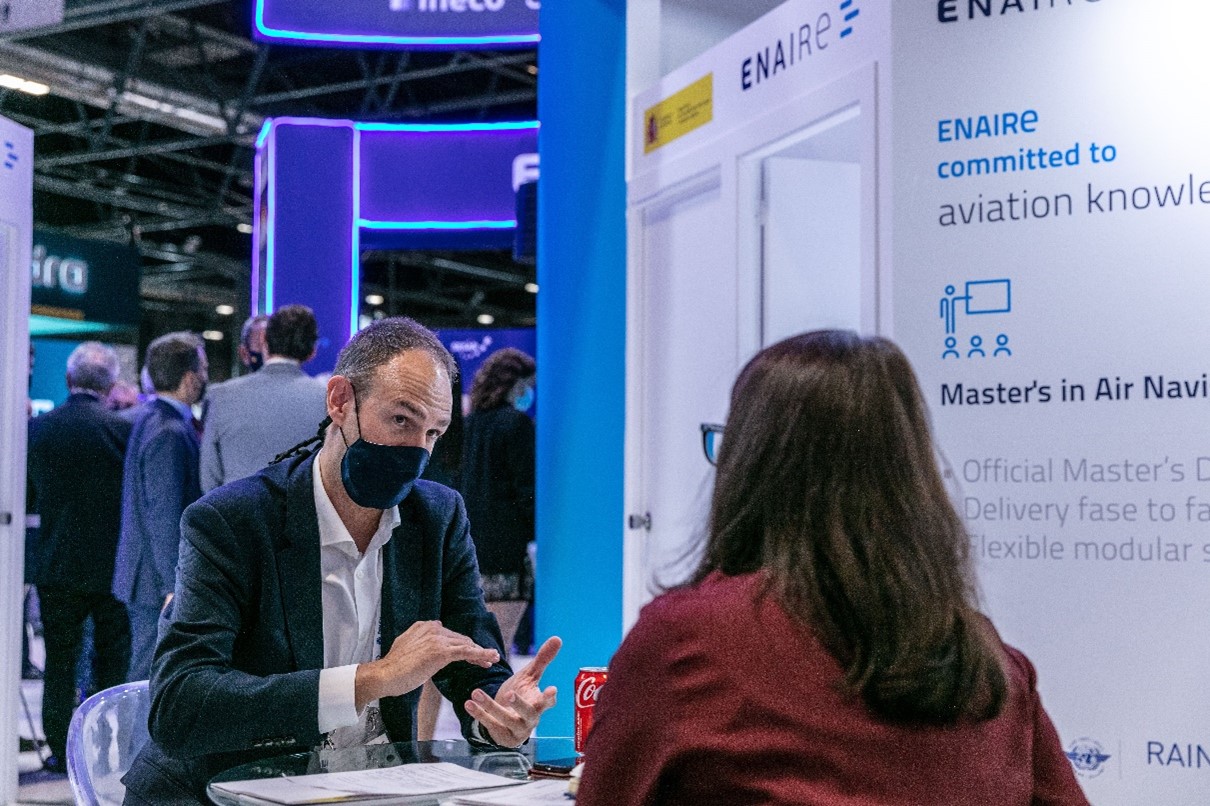 The Master's in Air Navigation Services Management and the training of air traffic controllers were other issues that spurred an interest among visitors to ENAIRE's stand.

ENAIRE presented several projects to modernise its air navigation services at various conferences. Foremost among them is the one that will bring GBAS II/III satellite navigation to the Adolfo Suárez Madrid-Barajas Airport. GBAS is the future of CAT III precision approaches with high resilience requirements. 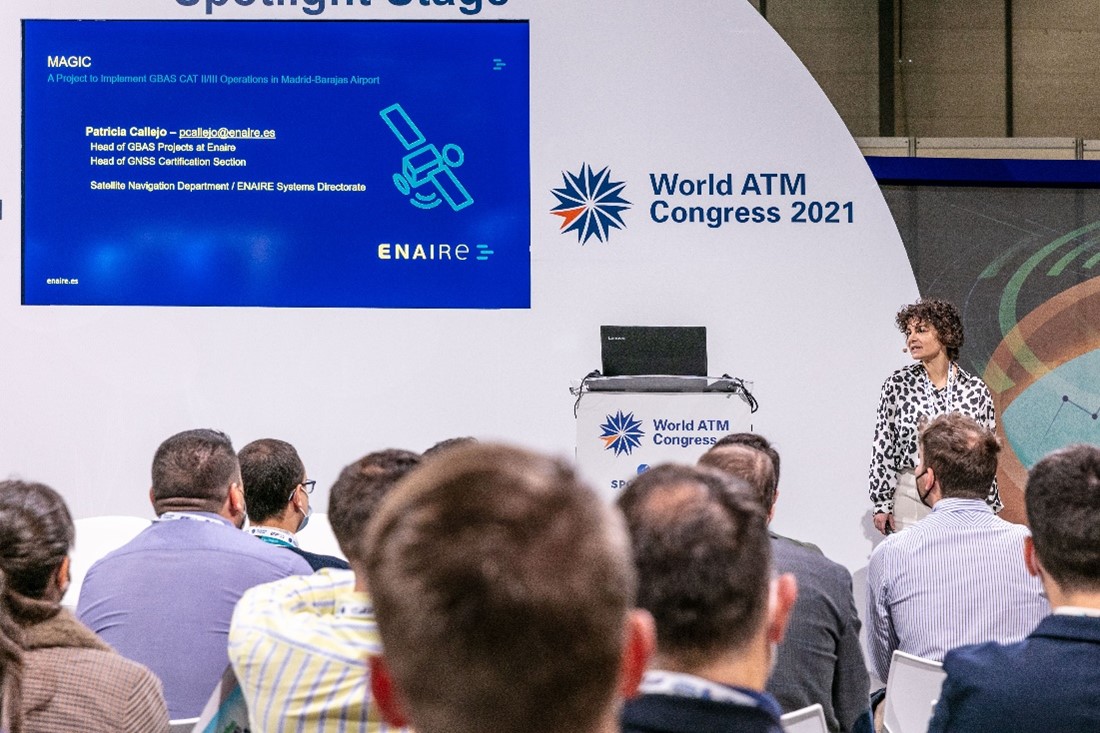 Patricia Callejo, GNSS manager at ENAIRE, during the presentation of the project.

The project, named MAGIC, an acronym for Madrid-Barajas Airport GBAS Implementation for CAT II/III ops, will allow the airport to operate with a more accurate air navigation signal. GBAS is considered the future of precision approaches with high resilience requirements. Conceived more than twenty years ago, GBAS is a land-based technology that boosts the GNSS signal (Global Navigation Satellite System), making it more reliable.

ENAIRE and Aena pioneered GBAS by putting into service CAT I GBAS operations at the Malaga Costa del Sol Airport in 2014. It was the second airport in Europe, and the fourth in the world, with this technology. Two CAT II/III GBAS prototypes were subsequently installed at two Spanish airports as part of the SESAR industrial research framework. Currently, ENAIRE and the Adolfo Suárez Madrid-Barajas Airport are working closely to implement CAT III GBAS operations at this aerodrome, which could turn it into the first GBAS CAT III scenario in the world.

Atalayar: The focus of the aviation world is on Madrid

The World ATM Congress won several awards, which demonstrates how well it has received by the public. Thanks to an agreement between IFEMA and World Air Traffic Management, this event will be held in the same venue for five more years, thus turning Madrid into the centre of the world for the powerful air transport industry.