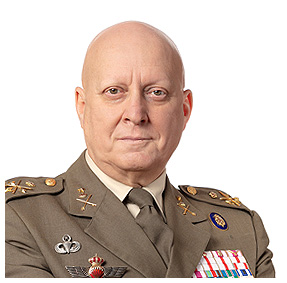 Director General of Infrastructure for the Ministry of Defence.

He completed the General Staff course at Spain's Armed Forces College, and he holds a Master's Degree in Peace, Security and Defence from the "General Gutiérrez Mellado" University Institute. Degree in International Studies (Sociedad de Estudios Internacionales), in Advanced Strategic Studies for Afghan Senior Officers, in Advanced National Defence Studies for Ibero-American Senior Officials. He has completed the Parachuting Unit Command course and the Advanced Armoured Unit course in the USA.

He has been assigned to the Paratrooper Brigade, the Directorate General of Defence Policy, the Supreme Headquarters of the Allied Powers in Europe (SHAPE-NATO) in Mons, Belgium, and Spain's Army Staff. He has acted as field assistant to HRH the Prince of Asturias.

He has participated in several international missions (UNPROFOR in Bosnia-Herzegovina, UNIFIL in Lebanon and ISAF in Afghanistan on two occasions).

He organised and was the first head of the land brigade of NATO's Very High Readiness Joint Task Force (VJTF).