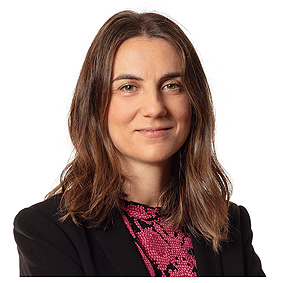 Subdirector general for Economic and Legal Planning of Secretariat of State for Economy and Business Support - Ministry of Economic Affairs and Digital Transformation.

Degree in Law and Business Administration from the Autonomous University of Madrid (2005).

María Sobrino started out at the Ministry of Industry, Tourism and Trade, where she was area manager in the EU Trade Policy Sub Directorate. She subsequently spent much of her career with the competition authority, first as area manager of the Sub-Directorate for Studies and, since the creation of the CNMC (October 2013), as deputy director of the rail sector at the Transport and Postal Industry Directorate.