ENAIRE, in its commitment to the continuous digitisation of its services, is implementing a series of technological and operational improvements in the air control tower at the Málaga-Costa del Sol Airport in order to promote greater efficiency and safety in air traffic management.

Autoswitch procedure in takeoffs improve the communicating with aircraft

The implementation of the Autoswitch process has consolidated communications between pilots and air controllers during takeoffs from this airport. This procedure allows departing aircraft to contact the approach controllers directly when they reach 2,000 feet (almost 610 metres), thus clearing the frequency used by air controllers in and around the airport.

As Spain's air control service provider, ENAIRE is working on operational procedures that facilitate the exchange of information between pilots and air traffic controllers. The implementation of Autoswitch seeks to enhance the safety of flights departing from this airport. The control tower at the Málaga-Costa del Sol Airport is the second facility in ENAIRE's network to incorporate this procedure, first implemented at the Josep Tarradellas Barcelona-El Prat Airport.

Furthermore, ENAIRE is currently installing new, larger displays at this control tower. These improved ergonomics allow air traffic controllers to make better use of the various radar tools to monitor air operations, thus increasing the efficiency and safety of our service. 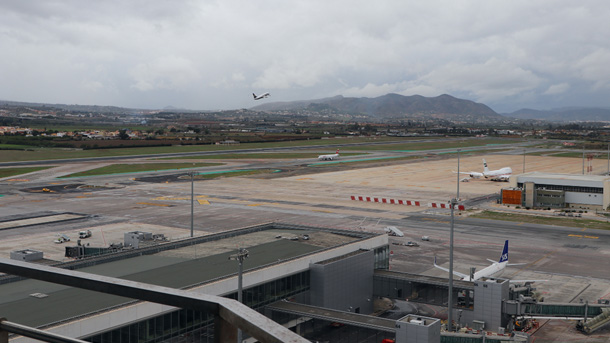 The Málaga control tower has become the first facility in the ENAIRE network to implement the "First Brief" tool. This system, developed by ENAIRE, can be used to customise and optimise the information that air controllers need to provide their service. This "integrated briefing" tool streamlines the interface between airport and approach controllers.

This tool enables controllers to hold briefings from any mobile device or platform, thus helping to significantly cut down on paper use. First Brief, which is constantly evolving, will be deployed in the next few months at ENAIRE's Air Control Centre in Barcelona, and the control towers at the airports of Almería, Melilla and Federico García Lorca Granada-Jaén. It is expected to be in service throughout the ENAIRE network sometime in 2021.